It was Sam Adams who discovered in 1967 that there were more than a half-million Vietnamese Communists under arms – roughly twice the number that the U.S. command in Saigon would admit to, lest Americans learn that claims of “progress” were bogus. Gen. William Westmoreland had put an artificial limit on the number Army intelligence was allowed to carry on its books. And Gen. Creighton Abrams specifically warned Washington that the press would have a field day if Adam’s numbers were released, and that this would weaken the war effort.

A SECRET/EYES ONLY cable from Westmoreland’s deputy, Gen. Creighton Abrams on August 20, 1967 stated: “We have been projecting an image of success over recent months,” and cautioned that if the higher figures became public, “all available caveats and explanations will not prevent the press from drawing an erroneous and gloomy conclusion.”

The Communist countrywide offensive during Tet (January/February 1968) made it clear that the generals had been lying and that Sam Adams’s “higher figures” were correct. Senior intelligence officials were aware of the deception, but lacked the courage to stand up to Westmoreland. Still (and sadly), Sam remained reluctant to go “outside channels.”

A few weeks after Tet, however, Daniel Ellsberg rose to the occasion. Dan learned that Westmoreland was asking for 206,000 more troops to widen the war into Cambodia, Laos, and North Vietnam – right up to the border with China, and perhaps beyond. Someone else promptly leaked to the New York Times Westmoreland’s troop request, emboldening Ellsberg to do likewise with Sam Adams’ story. Dan had come to the view that leaking truth about a deceitful war would be “a patriotic and constructive act.” It was his first unauthorized disclosure. On March 19, 1968 the Times published a stinging story based on Adams’s figures.

On March 25, President Johnson complained to a small gathering, “The leaks to the New York Times hurt us…We have no support for the war. This is caused by the 206,000 troop request [by Westmoreland] and the leaks…I would have given Westy the 206,000 men.” On March 31, 1968 Johnson introduced a bombing pause, opted for negotiations, and announced that he would not run for another term in November.

Sam Adams continued to press for honesty and accountability but stayed “inside channels” – and failed. He died at 55 of a heart attack, nagged by the thought that, had he not let himself be diddled, many lives might have been saved. His story is told in War of Numbers, published posthumously.

Samuel A. Adams, a former Central Intelligence Agency analyst who was a co-defendant in Gen. William C. Westmoreland’s libel suit against CBS, died yesterday, apparently of a heart attack, at his home in Strafford, Vt. He was 54 years old.

Mr. Adams, who specialized in Southeast Asia, was a paid consultant and a major contributor to a 1982 CBS documentary called ”The Uncounted Enemy: A Vietnam Deception” that accused General Westmoreland’s command staff of conspiring to minimize enemy troop strength in 1967. During the 18-week libel trial, which ended in February 1985, an account in The New York Times said that the documentary probably could never have been made without Mr. Adams’s help.

Shortly before a Federal District Court jury in New York was to begin deliberations, the suit was settled with a joint statement that expressed the network’s respect for the general’s ”long and faithful service to his country” and his esteem for CBS’s ”distinguished journalistic tradition.” There was no monetary compensation to General Westmoreland. A Witness for Ellsberg

Mr. Adams, who served in the C.I.A. from 1963 until 1973, had testified for the defense in another celebrated case: the espionage trial of Daniel Ellsberg and Anthony J. Russo, accused in connection with the illegal transmission of the Pentagon papers, a secret Government-sponsored history of the Vietnam War. Citing Government misconduct, a Federal judge dismissed all charges against the two.

At that trial Mr. Adams spoke publicly for the first time about his belief that there had been political pressures in the military to depict the North Vietnamese and Vietcong in 1967 as weaker than they actually were.

A direct descendant of the Adams family of Colonial Massachusetts, Mr. Adams was born near Bridgeport, Conn., on June 14, 1934, the son of a member of the New York Stock Exchange. He was a graduate of St. Mark’s School in Southampton, Mass., and of Harvard, where he majored in European history. After graduating from Harvard in 1955 he served for two years in the Navy, then entered Harvard Law School in 1959. He left two years later.

In March 1963 Mr. Adams was accepted as a C.I.A. officer trainee at Langley, Va. After some initiation in what he later called ”the nuts and bolts of espionage,” he began work as an intelligence analyst and wrote a study on the economy of the Congo Republic, Leopoldville (now Zaire), for which he was commended. Questioned Count of Enemy

After visiting South Vietnam four times in 1966 and 1967, Mr. Adams concluded that senior military intelligence officers were underestimating the strength of the enemy, perhaps by half.

He pressed that view on his superiors. But, Mr. Adams said, late in 1967 the C.I.A. reached an agreement with the military on lower figures. He wrote a memorandum calling the agreement ”a monument of deceit.” In January 1968, after the Tet offensive in Vietnam, the C.I.A. adopted an enemy count along the lines he had recommended. By then, he had left the Vietnamese affairs staff in protest, and was concentrating on Cambodia.

In 1969 Mr. Adams removed C.I.A documents, later used in the Westmoreland trial, and buried them in the woods near his 250-acre farm in Virginia. After his resignation from the agency in 1973, he roamed the country looking for former officers who might confirm his charges of a Saigon cover-up.

From the massive ”chronologies” Mr. Adams compiled, he detailed his allegations in a Harper’s magazine article in 1975. He also testified before the House Select Committee on Intelligence, which reached conclusions similar to his own.

Late in 1980 George Crile, who had edited the Harper’s article and by then was a producer for CBS, asked Mr. Adams to become a consultant on the Vietnam documentary. Later Mr. Crile was to write a memorandum to Mr. Wallace in which he said that ”Adams was the thread, he delivers the indictment to us.”

Mr. Adams signed a contract with W. W. Norton & Company to write a book on the alleged deception. He was working on revisions of the book, entitled ”Who the Hell Are We Fighting Out There?,” at the time of his death.

He is survived by his wife, the former Anne Cocroft, and a son, Abraham, of Strafford. Also surviving is a son from a previous marriage, Clayton Pierrepont Adams of Waterford, Va.

—————————————————————————–
Also see: “A Review of Who the Hell Are We Fighting? The Story of Sam Adams and the Vietnam Intelligence Wars: One Intelligence Analyst Remembers Another” by C. Michael Hiam, Hanover, NH: Steerforth Press (2006), 326 pages, in Center for the Study of Intelligence, CIA library (https://www.cia.gov/library/center-for-the-study-of-intelligence/csi-publications/csi-studies/studies/vol50no4/a-review-of-who-the-hell-are-we-fighting-the-story-of-sam-adams-and-the-vietnam-intelligence-wars.html);

The Lasting Pain from Vietnam Silence

Exclusive: Many reflections on America’s final days in Vietnam miss the point, pondering whether the war could have been won or lamenting the fate of U.S. collaborators left behind. The bigger questions are why did the U.S. go to war and why wasn’t the bloodletting stopped sooner, as ex-CIA analyst Ray McGovern reflects.

Ecclesiastes says there is a time to be silent and a time to speak. The fortieth anniversary of the ugly end of the U.S. adventure in Vietnam is a time to speak – and especially of the squandered opportunities that existed earlier in the war to blow the whistle and stop the killing.

While my friend Daniel Ellsberg’s leak of the Pentagon Papers in 1971 eventually helped to end the war, Ellsberg is the first to admit that he waited too long to reveal the unconscionable deceit that brought death and injury to millions. 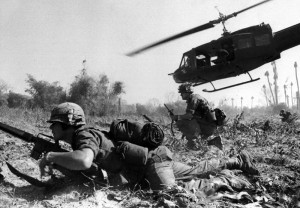 (Scene from the Vietnam War)

I regret that, at first out of naiveté and then cowardice, I waited even longer – until my own truth-telling no longer really mattered for the bloodshed in Vietnam. My hope is that there may be a chance this reminiscence might matter now – if only as a painful example of what I could and should have done, had I the courage back then. Opportunities to blow the whistle in time now confront a new generation of intelligence analysts – whether they work on Iraq, Syria, Afghanistan, ISIS or Iran.

America’s war in Vietnam, which was authorized by the Gulf of Tonkin Resolution a half century ago, had lasting consequences for the nation, including deeper public distrust of government and government’s determination to restrict the people’s right to know, as retired JAG Major Todd E. Pierce explains. (read full article)

War of Numbers: An Intelligence Memoir by Sam Adams, foreward by David Hackworth

Sam Adams loved intelligence work, and that enthusiasm shines throughout this memoir of his years with the Central Intelligence Agency. His career was dominated by an epic struggle over Vietnam — over military attempts to hide the true size of the enemy forces there, and over the integrity of the intelligence process. Adams’s insistence on telling the truth caused an ungodly ruckus in both Washington and Saigon at the time, and years later, after the CIA had threatened to fire him (on thirteen occasions!) and he had quit the agency in disgust, Adams brought his story back up to the surface more loudly than ever in a CBS television documentary which eventually resulted in a notorious trial on libel charges brought by General William Westmoreland.
After leaving the CIA, Adams sat down to write an account of his life at the agency. There is nothing else quite like the story he tells. Books here and here.