As a senior official at the National Security Agency Thomas Drake witnessed not only widespread waste, fraud, and abuse, but also gross violations of our 4th Amendment rights.

He was a material witness and whistleblower on a multi-year Department of Defense Inspector General audit of a failed multi-billion dollar flagship program called TRAILBLAZER and a breakthrough multi-million dollar intelligence data collection, processing, and analysis system called THINTHREAD that was ready to deploy.

THINTHREAD had been carefully designed to handle data in massive amounts and variety, but to do so with built-in 4th Amendment and privacy safeguards, while providing superior intelligence. NSA rejected it.

Tom Drake stepped forward with the integrity, the courage, and — let’s say it, the true patriotism — to blow the whistle. The Department of Justice retaliated by indicting and prosecuting Drake under the Espionage Act and, once again, became the laughing stock of the legal profession.

In Drake’s case, government attempts to abuse the law to intimidate those who would speak truth to power expose in a telling way what has become the military-industrial-intelligence-surveillance-cybersecurity-congressional-media complex and its abuses, which drain our treasury, endanger our liberty, and make our country less — not more — secure.

Sam Adams Associates is not the first group to give high recognition to Tom Drake’s fearless integrity and endurance in the ordeal he was put through. Earlier this year he was awarded the Ridenhour Truth-Telling Prize.

(Report below from Ray McGovern)
The occasion was the annual meeting of the Academy of Philosophy and Letters, June 13, 2015, at the BWI Doubletree Hotel — oddly, surrounded by NSA buildings in Linthicum, MD.

The evening program was hosted by John Henry, of the Committee for the Republic.

The Committee for the Republic was pleased to afford an appropriate occasion for William Binney to receive the framed citation (in English and German) for the Sam Adams Award for Integrity in Intelligence. The award was originally presented to Binney at an SRO ceremony in Berlin on January 22, 2015.

Ed Snowden, who was live-streamed into that Berlin ceremony, emphasized that “Without Bill Binney there would be no Ed Snowden.” Bill, in turn, had been greatly encouraged by the courageous, principled stand taken by Tom Drake in facing down the U.S. Department of Justice and NSA successfully, after four years of persecution that included government-provided “evidence” proven in Court to have been forged.

Actually, in a very real sense, it was a triple-play: Drake to Binney to Snowden. So it was altogether appropriate that Tom Drake be the Sam Adams Associate to present the framed award to Bill Binney on June 13, 2015 in the belly of the (NSA) beast.

Tom also had been the clear choice of his colleague Sam Adams Associates to present the 2013 award for integrity in intelligence to Ed Snowden in Moscow on October 7, 2013. As soon as Ed surfaced in Hong Kong, he made it clear that the U.S. government abuse of Tom had convinced Ed that he had to leave the U.S. in order to achieve his mission and have some chance — however slight it seemed at the time — of avoiding spending the rest of his life in prison.

Hats off to Drake to Binney to Snowden: courageous patriots all! 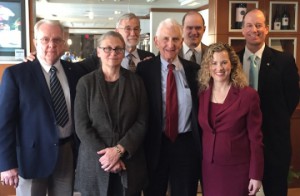